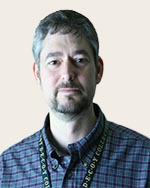 My interest in decoy collecting began at a very young age. My father Alan Bryant and his good friend, Lynn Woodworth, were both early decoy and antique collectors. I started tagging along to the flea markets, antique shows, and auctions and the hook was set. My collecting interests continue to evolve and include folk art, wood carvings, and historic Americana to go along with my core collection of decoys and sporting items.

Background: I grew up in Arkansas City, KS and graduated from the University of Kansas with a degree in Civil Engineering. I lead a transportation design group for a private consulting firm. I’m happily married with three children. I attended my first MDCA show in 1987, missed in 1988, and have attended every year since!

Favorite Decoy: My current favorite is the only known Dodge swan decoy with raised wings. A hollow carved working decoy with serpentine neck, amazing crazed surface and striking form all combine to make it an instant classic.